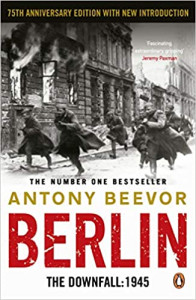 It’s rather surprising that this is the first book by Antony Beevor that I’ve read, given my interest in his subjects. It was first published in 2007, so I’m late to the party. When it was a Kindle 99p deal recently I decided it was just the kind of meaty read I needed at that moment, snapped it up and read it very quickly. I can say straight away that Beevor deserves all the praise and prizes his books have won him. Berlin is thoroughly researched, using German and Russian sources (I’m in awe) and a gripping read. It is definitely a military history, which made reading it on the Kindle frustrating. With all the maps together at the beginning of the book, it’s impossible to check as you read why certain rivers and towns were so strategically important or exactly how a particular pincer movement would work.

In some places, the book is almost a blow by blow account of the campaign and Beevor doesn’t hold back from describing in detail the atrocities committed by both sides and the hellish horror of the eventual occupation of Berlin. Yet by drawing on diaries and later accounts by those who were there, he’s able to introduce rare touches of humanity. For instance, a Russian officer finding himself against a group of German ‘soldiers’ who were actually fourteen-year-old boys in helmets far too big for them. ‘Poor boys’, he said, ‘I feel sorry for them.’ (What happened to the ‘poor boys’, we’re not told.) A Wehrmacht officer ranting against the ‘criminality’ of wasting such young lives in a lost cause. The German high command had no such scruples; they were prepared to sacrifice everyone in Berlin rather than admit defeat, to the extent that some army officers started ignoring orders. The ‘leaders’ themselves either tried to escape or committed suicide.
( Collapse )
Collapse