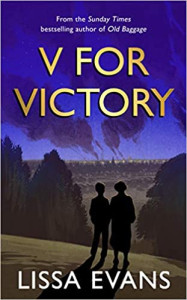 It’s 1944 and doodlebugs are falling randomly on an increasingly crumbling and dirty London. Noel and Vee, whom we left at the end of Crooked Heart about to set up home together in the large Hampstead house which Noel inherited from his godmother Mattie, have been living there for four years. Vee has changed her name illegally so that she can say she’s Noel’s aunt and lives in constant fear of being found out. She takes in lodgers to make money but not any old lodger will do. These have to be able to offer some specialism so that they can tutor young Noel, who refuses to go to school. So, a doctor bombed out of her own home tutors him in science, a journalist in English and Latin and so on. As well as being academically brilliant, Noel does most of the cooking in the house, whose inhabitants are like a family.

Oh, Noel. So extraordinarily intelligent, so mature for his years and apparently sophisticated but with a vulnerability that melts your heart with love for him. At one point in the book, Vee reflects that if she died now, she would never find out what happened to Noel, which would be like not knowing the ending of a film. Unlikely as she seems as a mother-substitute for such a child, Vee has done a good job looking after him and keeping him safe. In this novel, Noel finds out something about his parents and, like Vee, you so long for him not to be hurt.

Another interesting thread introduces Chief Warden Winnie. The bravery and stoicism of her colleagues, the awful responsibility she carries, are a tribute to the people who did this work during the war. The connection with Noel is that she, her twin sister, best friend and another important character were all once members of Mattie’s group of Amazons, as described in Old Baggage.

I read this very quickly and, as soon as I’d finished, went back to the beginning and read it all over again. That’s how much I love Lissa Evans’ writing, her sense of time and place (no infuriating anachronisms here) and her wonderful characters. Many thanks to the publishers and NetGalley for the preview. The book will be out on 27th August.
Collapse