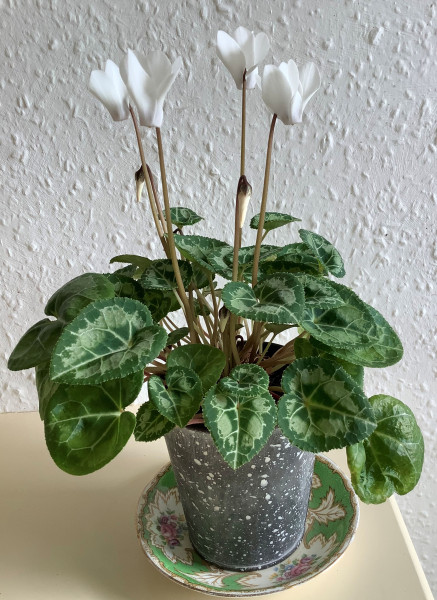 I bought this cyclamen in a sale at the garden centre just after last Christmas. They had it outside but under cover, so I wasn’t sure if it should grow indoors or outside. To be on the safe side, I put it on the same cool windowsill where I grow orchids. To my delight, after being watered carefully during the year, it’s flowering again, as you see.

Yesterday afternoon, we had one of the wildest spells of weather I’ve ever experienced. First, it was black as night. Then the wind started whipping trees and shrubs about and then, whoosh! In the space of about five minutes a deluge turned the road into a fast-running stream, there was a huge puddle at the base of the drive and standing water on part of the garden where this sometimes happens. Within half an hour the sun was out and everything calm again. While peering out of one of my kitchen windows to see the damage I noticed that a white cyclamen is also flowering in the garden, but it's the type where the flowers appear before the leaves.

I’ve already been round the garden picking up chunks of oak tree which had come down and no sooner had I got indoors, than it began raining out of a sunny sky. So bizarre. I did say ‘things’, plural, to please. The cyclamen are two. Another is that I’m now eating my own tomatoes and have a fine crop of peppers on the way.
Collapse