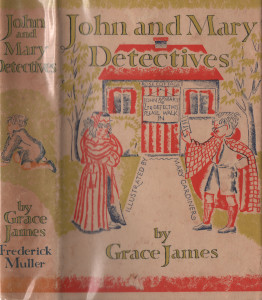 Judging by the number of reprints, John and Mary Detectives was the most popular book in Grace James’ long series about John and Mary. In this book, the second chapter is called ‘Stir-up Sunday’.

Why is it called Stir-up Sunday?’ Mary asked.
‘It’s in the prayers,’ John answered. ‘Didn’t you hear the Vicar say ‘Stir up …..?’
‘I must have missed it. Somehow I find it very hard to attend in Church…’

John and Mary walk home from church with Push (their aunt) discussing what they think about during the service. Push admits that with her, it’s often clothes. Mary says she likes biting her name; the back of the pew in front is just the right height for her to bite into it to make letters. (I’ve found that people who’ve read the book as a child always remember this incident.) John confesses to playing dentists. He makes little holes and stuffs them with pieces of blotting paper which he brings from home. After this edifying conversation, they arrive back home for Sunday dinner. At Smockfarthing, this is always especially nice. The table is beautifully arranged, the food extra good and John and Mary expected to be particularly clean and well behaved. After the first delicious course, they try to guess what will be for pudding but they all guess wrongly. It’s ‘the first of the Christmas puddings!’

I’m sorry to say that when pudding is served, John disgraces himself. He opens his mouth with food in it! He turns bright red and chokes! Everyone is shocked by this lapse of manners until sensible Ellen, the parlourmaid, whisks him away and tells him to get rid of whatever is in his mouth. John thinks he has broken a tooth and wants to see it, so he carefully removes the hard object which has caused so much trouble. It’s a sapphire! John and Mary’s first task as detectives was to find the sapphire which Granny has lost from her ring and John proudly presents it to her. Mary guesses what happened, as I’m sure you have already done.

Any more examples of Stir-up Sunday in children’s fiction? I’m sure there must be something by Noel Streatfeild; Christmas with the Crystals perhaps?
Collapse