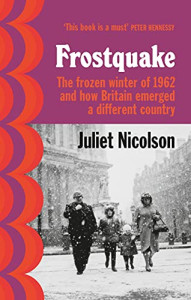 Last month I read eighteen books but don’t have much to say about them. There were a lot of re-reads because that’s what I was in the mood for. I had a few Kindle deals, one of which was Frostquake by Juliet Nicolson (yes, a Sissinghurst Nicolson). It’s supposed to be about the terrible winter of 1962 -63 but veers off in all directions. There’s not enough snow for me and far too much about the London scene, which she and her brother Adam saw as children from their King’s Road home. She has the nerve to call it ‘the wrong end’, as if anyone could live there.

One minute we’re reading that six million homes still didn’t have inside loos, next we’ve moved on to Tara Brown and all the happening people. It wasn’t happening for those six million or for millions of others. Most of the book is about the Beatles, Profumo and other sixties highlights. The full title of the book is The frozen winter of 1962 and how Britain emerged a different country. Nicolson’s thesis seems to be that the winter somehow ushered in the social changes of the sixties, allowing Harold Wilson to become Prime Minister and lads from Liverpool to get OBEs. This seems to me a very spurious link. And three chapters about Sylvia Plath is three too many.
Collapse