I just had an unwelcome shock when I walked into the sitting room and immediately heard a loud rustling sound. Luckily, instead of panicking I surmised, correctly, that something had come down the chimney. But what? Never since I’ve lived here have I filled a whole dustpan with debris. Some of it was just pieces of cob, which I have to sweep up every week, especially after heavy rain. The rest was what I can only call matter, as I have no idea what it was. Something very long dead? Part of an old nest? I’ve no idea. After cleaning it up I went outside and it wasn’t even raining or snowing (yet). It was too dark to see if there was anything wrong with the chimney so I’ll have to wait until tomorrow for a better look. I just pray there’s no more fun tonight. 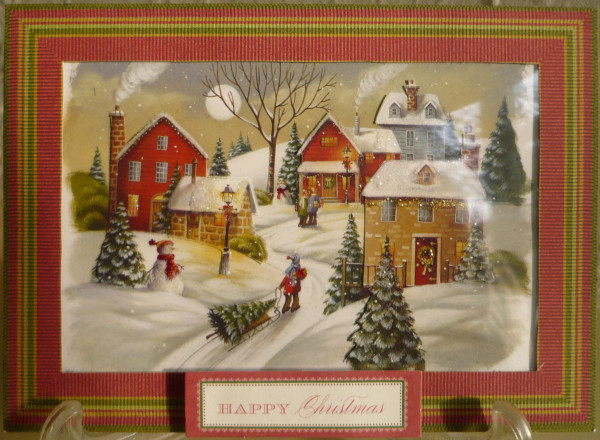 This is a card which I see I made in 2016! I liked it so much I didn’t send it to anyone but kept it as a decoration. Now I send it to all my readers. Special greetings to anyone else spending Christmas alone. We’re not the only ones! 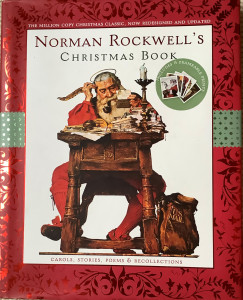 Last week, (or was it the week before? Something has happened to time), I went shopping. Not just a quick trip to the village shop but actually going into town and in and out of shops, looking for books. As it turned out, I absolutely hated it and won’t be doing it again in a hurry. I did, however, come home with two bags full of books, mostly from charity shops. One (so heavy!) was this Norman Rockwell book, which I later found was a great bargain. American artists are particularly good at Christmas (Susan Branch, Tasha Tudor), so the Rockwell looked promising. The pictures are lavishly produced but the rest of the contents are strange. There are Christmas stories (quite dull, the ones I’ve read), carols printed out with the music and so on; quite a hotchpotch. I was surprised by how many pictures included black people, which seemed a good thing until I saw that a story mentioned ‘the coloured maid, Alice’. Eew! It reminded me of The Help and put me right off. This book should have been revised before it was reprinted. I also got: a book by Monty Don, Christmas novels by Jenny Colgan and Trisha Ashley (both now read), Sissinghurst by Adam Nicolson and Great Britain’s Great War by Jeremy Paxman, all in very good condition. I’m hoping these will last until at least after Christmas. I shall, of course, be reading A Christmas Carol as usual, even though everything feels so un-Christmassy. It may not seem like much to write home about when all over the internet people are posting pictures of the hundreds of jigsaws they’ve completed this year. It’s something for me, though, because I’m not very good at them and very quickly get bored before I’ve finished. This one is suitably festive.

Everything is horrid but music endures and comforts. Here’s a Christmas favourite of mine, from L’enfance du Christ by Berlioz. I was expecting The Big Freeze to be a documentary of the type you might watch on Talking Pictures, so I was disconcerted to see Chris Packham (rather a bête noire of mine) telling us that this was a special edition of Winterwatch. I needn’t have worried, as the bulk of the programme was taken up with a contemporary account compiled by the old Tonight team: Cliff Michelmore (what an excellent broadcaster he was), Derek Hart and Kenneth Allsopp. It’s strange how selective memory is. I don’t recall the twenty-foot snow drifts, abandoned cars and trains and starving cattle, although it must all have been on the news. I remember only what happened to us and as we lived in the suburbs, we were spared being snowed in, unlike so many people in country areas. My strongest memory is that in early March there were still great heaps of dirty, frozen snow at the edges of all the pavements.

My journey to school was quite long: a fifteen minute walk to the bus stop, then the bus followed by another, shorter walk at the other end. I don’t remember having a day off school but I may have got that wrong. We schoolgirls took to wearing thick, ribbed stockings (don’t get excited, chaps), to the bemusement of our mothers, who had bad memories of the black woollen stockings they had to wear to school. Ours were warm and, at that time, fashionable. That autumn, the fashion pages had headlines like ‘Remember last winter?’ and were full of warm clothes.

Keeping warm at home wasn’t easy. We had two coal fires downstairs, my parents had an electric fire set into a wall in their bedroom and that was it, except that you could keep warm in the kitchen if the oven was on and the door open. Porridge for breakfast set us up for the journey to school. We had one of those cylinder paraffin stoves (now regarded as antiques), which had previously been used only when my sister or I were ill in bed. We could lie tucked up, watching the comforting red light which glowed through the little window. Imagine allowing that now! The paraffin was bought from the ironmonger’s at the end of the road (how wonderful that shop smelt). That winter, the paraffin heater was put in the hall, an unheard-of extravagance. I don’t remember that it did much to take off the chill.

The striking factor about that freeze was how long it lasted. Some people are predicting a Waxwing winter this year. I do hope they’re wrong. I last saw Waxwings in 2010.

I’ve started watching the old BBC series of The Box of Delights, just one episode at a time. It did the trick; partly nostalgia but mostly the music. Here’s the original from Hely-Hutchinson’s Carol Symphony. 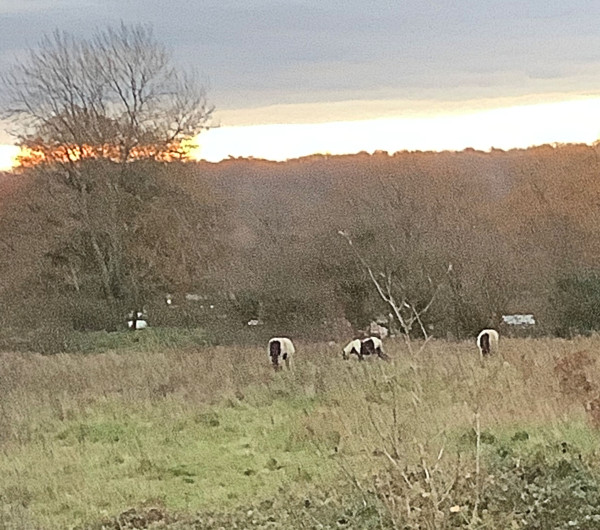