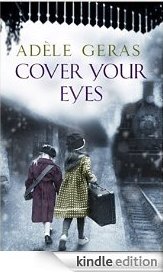 I enjoy Adèle Geras’s novels because they’re so full of the kind of detail I like about clothes, houses, gardens etc. Cover Your Eyes has all this, as expected, but is also a kind of ghost story, with a mystery buried in the past. There are two main characters. Megan is an aspiring journalist who is dumped by her lover, also her boss. She has previously interviewed Eva Conway, a once-famous fashion designer, at her home, Salix House. When the two meet again, there seems to be a bond between them.

Salix House is at the heart of the novel. Eva and her husband Antoine bought it as a wreck and she turned the house and garden into a thing of beauty. Now Antoine is dead and the house is shared by Eva’s daughter Rowena, her husband and their two little girls. Eva had made the house over to Rowena to avoid death duties and now Rowena wants to sell it, because they can’t afford the upkeep. Eva is utterly miserable at the thought of leaving not only her creation but also her memories, both good and bad. For Eva is constantly suppressing bad memories, to the extent that she has every mirror covered up for fear of what she might see in it. Who or what is this presence which can sometimes be felt or worse, seen? It’s all linked, we know, to what happened to Eva just before the war, when she was sent to England with the Kindertransport and her sister was left behind. Curiously, when Megan visits the house again, then moves in to look after the children, she senses something strange and thinks she sees – someone? – in her looking glass. Possibly it’s because Megan also feels guilty about something in her past. So there we are; a ghost story and an exploration of the nature of guilt and forgiveness.

By the end of the book I’d changed my view of most of the characters. When Megan first appears, broken hearted, she seems a sympathetic character but isn’t she actually rather stupid, having an affair with a married man WHEN THEY NEVER LEAVE THEIR WIVES? Also something of a slag, sleeping with the first available man and then falling immediately for another. Can I really be more old fashioned than Adèle Geras who is, if she will forgive my saying so, even older than I am? Oh well, I’m not a popular novelist and obviously never will be as I am far too strikt. Rowena at first appears shrewish, bossing her mother about. When I knew more about her childhood, I felt sorry for her and started to dislike Eva. As this is fiction, every problem is resolved at the end of the book.

I read the book very quickly and although I don’t think it’s Adèle Geras’s best novel, it is an enjoyable read. It’s published by Quercus and I read it courtesy of NetGalley. I sometimes wonder if the critics and I have read the same book. Here are some of the comments quoted on the cover of A Spot of Bother by Mark Haddon.
‘Amusing, brisk and charming’
‘A delightfully dry comedy’
‘A crisp, light, effortless read’

And now from the resumé: ‘George…quietly begins to lose his mind.’ Oh; how very amusing. True, farcical events pile upon each other to reach a classic comic dénouement at a wedding but on the whole I found this account of a man having a breakdown extremely disturbing and was glad to finish it (it's also too long, IMO). If you fancy reading a book about an on-off wedding, try Made in Heaven by Adèle Geras. For family breakdown I recommend All Families are Psychotic by Douglas Coupland. I’d advise anyone who feels their own mental equilibrium is somewhat fragile to avoid A Spot of Bother. I loved The Curious Incident, BTW. Another family saga from Adèle Geras: A Hidden Life. Rich Constance upsets her relations by secretly changing her will shortly before she dies. She successfully sets out to cause trouble and the fallout affects everyone in the family. I enjoyed this but didn't warm to the characters. The most interesting part of the story is what disinherited Lou finds out about her grandfather, who was in a Japanese prisoner of war camp as a child. I finished this and another Robert Goddard in double quick time and will now start the treat I have been saving for a cold, miserable Easter: The Miracle at Speedy Motors by Alexander McCall Smith. I’m also of course looking forward to this .

Facing the Light by Adèle Geras. The only book I’d previously read by her was Made in Heaven (see here). I enjoyed it but I think this one is better. I’m at the same time racing through to see if I’ve guessed right about the family’s dark secrets, and not wanting to finish it. What I like about Adèle Geras’s writing is that she has the true novelist’s eye for detail (just like Dickens!) and doesn't fob the reader off with generalisations. So you will never find a woman described merely as ‘smartly dressed’ or ‘scruffy’; her outfit will be itemised. Similarly, there are no ‘borders of gay flowers’ (© E M Brent-Dyer) but borders of hollyhocks, delphiniums and so on. If a house is full of flowers, they are not just bowls of roses but bowls of a particular variety, such as ‘Buff Beauty’. And there are lots of descriptions of houses and their interiors. There is a paragraph about the kitchen in this book which I read twice, for the sheer pleasure of it. This all sounds rather chick-litty and I suppose it is in a way but it’s a cracking read and vastly superior to most. Just needs more about shoes, Adèle…

When I saw these two books

right next to each other on the shelf in my favourite charity shop (supports our local hospital) and they were Buy One Get One, how could I resist? They looked just like Neapolitan ice cream. Perhaps because this is not how I usually decide what to read? Or because I felt it wrong to be such a sucker for pretty packaging? Would a man buy a pink book? And does pink = chicklit = bad? Look at the cover of Saffy’s Angel by Hilary McKay. Would you guess that it is funny, touching, beautiful and has been enjoyed by three generations in our family? Or at the new covers for the Malory Towers books which I complained about. Mightn’t a girl be rather disappointed to find that there was little in these stories about boys or clothes? Or would Darrell, Sally and Alicia (my favourite, alas) be as fascinating as ever? Interestingly, the eight year old in Made in Heaven enjoys reading Malory Towers. She has her mother’s copies but which edition would they have been? Grandma’s would have been the originals.

Made in Heaven was the first adult book by Adèle Geras that I’ve read so I didn’t know what to expect. The complex family relationships described here are firmly in Joanna Trollope territory but this book is at the same time better written and less compelling: as it were Jean Ure to Jacqueline Wilson. I did enjoy it, especially some of the descriptions; Ceanothus being the exact colour of a blue licquorice allsort, for instance. My problem was not having much sympathy for the two older lovers while doting on some of the younger ones. You could say this is a book about a wedding dress (fab!). I will certainly read her other books now, whether or not they have pink covers. Anyway, I like pink. See what my next pair of socks is to be made of.